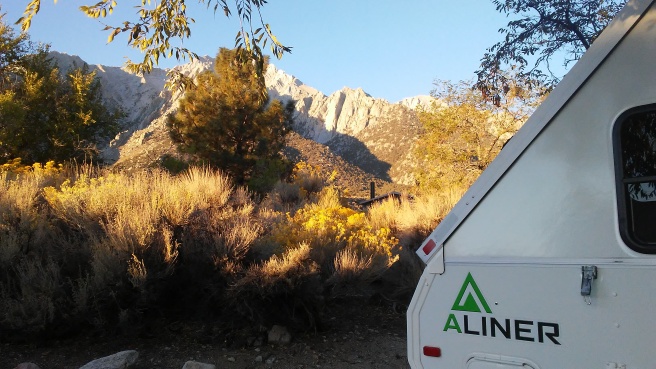 If you have never experienced the Sierra Nevada Mountains, it’s hard to visualize the dramatic views they present at every turn. My sister, Babs, niece Tara, Tara’s dog Copper, my girls Molly and Sadie, and I, spent three nights at the Lone Pine campground at the base of Mt. Whitney, the tallest peak in the contiguous United States. The campground is nestled in a narrow canyon, next to a clear, trout-stocked stream, just off the Whitney Portal Road. It’s at about 6,000 feet which makes it just a bit cooler than the Owens Valley below and significantly cooler than Death Valley just a short distance away.

The whole idea of going on a trip with my new trailer, without Mike to take care of all the details of hooking up to the car and setting up the trailer was a bit stressful; but Tara was an experienced RVer and her presence gave me confidence. Adding to my anxiety, there were a multitude of “active bear” signs and “caution – rattlesnake” signs that didn’t exactly engender a sense of security. The first night, I put all of my food that wasn’t in the refrigerator in the bear box. Technically, this should be called an anti-bear box but I’ll go with the flow. Then I slept fitfully, imagining I heard bears even though the dogs slept serenely.

In the morning, well almost morning, we walked to the restroom, a clean, fresh, pit toilet, by moonlight. I trusted the girls would alert me to the presence of any wildlife. We saw only bunnies.

One of the joys of being an insomniac is having the world to oneself, still, cool, and full of anticipation as the rising sun inexorably crawls down the crags of the western mountains. I strolled through the slumbering campground, hearing not a sound until I reached the tent section. Then gentle snoring and the occasional fart made the presence of men known.

At the top of the ridge above the campground, I found a strong cell connection where I could call home to check in with Mike to see how Mom was doing in my absence. She had been anxious at the idea of me being away, but I was confident she would soon forget, which was borne out by her question, when I returned three days later. “Are you just home from work?”, she asked.

I volunteered to be the camp cook, knowing that if we left that chore to either Babs or Tara, we would probably starve to death. The little galley in the Aliner proved perfect for our first night’s meal of grilled cheese sandwiches on cracked-wheat sourdough, with sauteed onions and bell peppers tucked in. I suppose a nice bottle of white wine would have been appropriate, but I opened the pinot noir anyway.

In no rush to hit the trail, we completed our morning ablutions and tidied our camp sites before setting off up the lower section of the Whitney Portal Trail. The upper section of this trail is perhaps the most well-known (and consequently heavily trafficked) trail in California. Avid hikers are attracted by it’s breathtaking panoramas and the bragging rights attached to summiting its 14,500′ peak. We had no such ambitions and were content to start from camp where the altitude was less breathtaking. This section of trail immediately left Lone Pine creek and ran parallel to it along the ridge above. Just when it was becoming almost too warm in the sun, a side trail allowed access to the creek just a quarter of a mile below, much to the dogs’ delight. After a refreshing dip in the stream, we were all ready for more climbing and continued up the trail, which quickly entered tall scrub vegetation and then trees, making it far more comfortable. The relative coolness of the forest was offset by the increased steepness of the trail which became a series of switchbacks that tested the limits of our knees. When we ran out of snacks, we retraced our path back to camp, having seen only a handful of other hikers.

With hours of daylight left and spent climbing legs, we turned to auto touring for entertainment. The road to Horseshoe Meadows is carved into the side of a crazy-steep mountain, barely two-cars wide. My passengers experienced the closest thing to flying one could experience in a car, while I focused almost exclusively on the road. The meadows were anti climactic and beastly cold (elevation 10,000″) so we retraced our route which was even more dramatic on the descent.

Back at camp, I re-positioned my trailer to a site closer to Tara’s rig. This site had shade and was half the distance to the restroom. It was also directly across from the camp host who was an affable fellow and a wealth of information. He assured me that the bear boxes were not necessary as long as we kept our food inside our trailers. The only pests we would encounter in camp were squirrels and other rodents. That night I slept peacefully.

2 thoughts on “As Advertised…The Maiden Voyage”